In the first Militaria In The Mist, I introduced our confusion about the “MOLLE Canteen Pouch”. Since we started collecting MOLLE gear, the canteen pouch is just like a phantom around us. Even we’ve got many other rare parts, the canteen pouch – which should be in large number – is still missing. But recently we found an explanation for this situation. 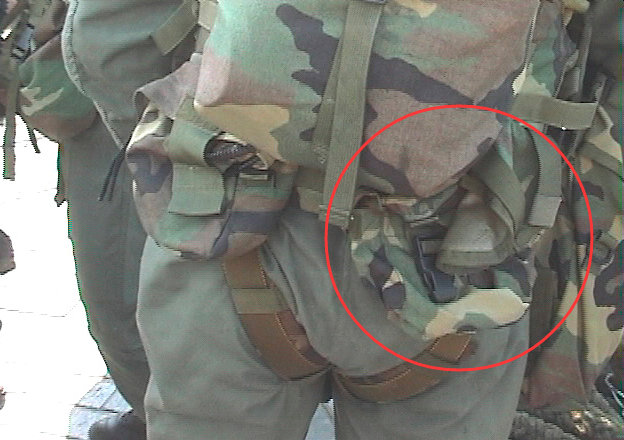 Days ago, I bought a set of Marine FSBE AAV gear, including the body armor and some pouches. Despite the body armor, other gears like pouches and carrying vests are all made by Specialty Defense Systems, or SDS for short. The FSBE AAV gear only earned single contract, in the year 2000, and the production quantity is limited. That’s why the FSBE AAV is so hard to find in the open market. The contract numbers of the SDS made gears are all the same: DAAD16-00-C-9231, and there is no known NSN assigned to them, only part number (P/N). The interesting thing is: their P/N are all start with “C9231” – the last five characters of the contract number, the rest of the P/N is regular seven-character SDS P/N start with “F”. I think these SDS made gears are specially produced for the FSBE AAV contract.

Since there is only few information I could obtain from the gear itself, I searched the Internet with the contract number as keywords, then I found a blog of a militaria collector in Okinawa. BTW this collector also runs a militaria store in local, I’ve visited his store several times. As I was viewing his blog, I froze for a moment: the canteen pouch on the right, isn’t it the “MOLLE Canteen Pouch” we’ve been looking for years?

And after reading its label, I realized a fact: it is not a part of MOLLE or MOLLE II, it’s a part of FSBE system.

Everything is making sense now:

Never expected thing got solved in this way.

Among 1997 to 2004, SDS made various woodland gears like MOLLE II, FSBE, R.A.C.K., etc. The canteen pouch was always taking a part in them, but the nomenclature has multiple variations:

Well, I’d like to announce “case closed”, but I realized a horrible fact: the canteen is not the only common part in the systems, many other gears like grenade pouch, magazine pouch, medic pouch do the same. Then here comes the problem: are these common parts of the systems in the same situation like the canteen pouch? I mean the common parts in different systems look the same, but in fact they are different thing? And there is not only woodland, but also 3-color desert, Army UCP, Marine coyote brown…

And not yet, this theory cannot explain everything. In the MOLLE Care and Use Instructional Video (the VHS in the MOLLE/MOLLE II system) shows many “MOLLE Canteen Pouches” which is definitely not FSBE. So what are these canteen pouches? Are they really issued, or just made some for demo?