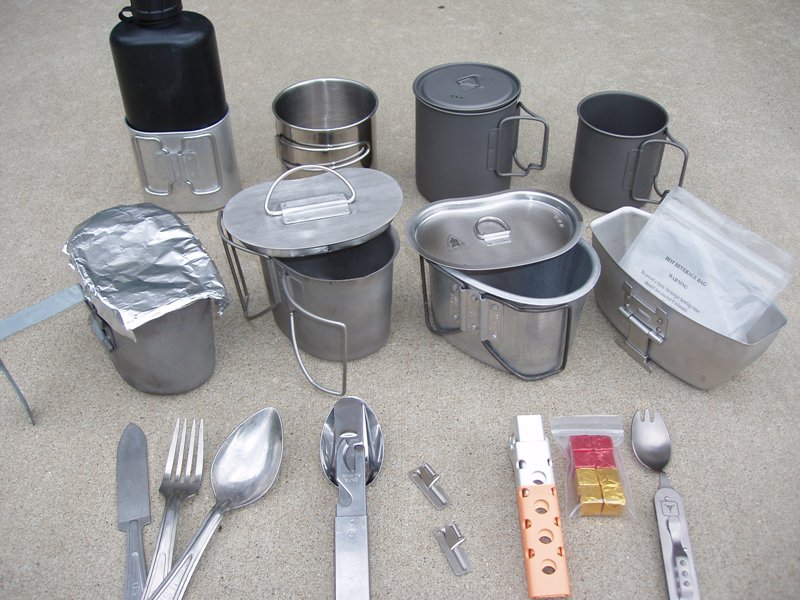 We all know that humans need an adequate supply of water to function and survive even during relatively short periods of strenuous outdoor activities. And there are a myriad of ways to carry water in a field environment available to today’s soldiers or civilians. Suitable canteens, bottles and bladders are issued or can be purchased in all sizes and shapes to fit your individual mission requirements. Each style of water container has some inherent advantages and disadvantages in any given situation. But they can all get the basic job done. The final choice often comes down to simply user preference. And there is nothing wrong with that.

Consequently, we can also all agree that a filled water container of some kind can rightly be considered mission essential in almost every field situation. But since you can drink the water directly from your chosen container do you really have any need for a separate cup? I submit that in most circumstances the answer is yes. In fact I believe it is prudent to always consider carrying a metal “canteen cup” of some kind while in the field. Bottom line, I consider the canteen cup to be an important survival tool and not a superfluous accessory. It does one thing very well that most water containers simply cannot. That is allowing you to effectively boil water on a direct heat source.

Why is boiling water so important? Well if you need to replenish your water from natural sources it may be necessary to purify by boiling before consuming. Or you might need to melt snow to drink. Or if you or your teammates begin to show the signs of hypothermia then drinking a hot beverage can mean the difference between someone continuing the mission or a possible medevac. When I was stationed at Ft Lewis 78-80, cases of hypothermia were routine on almost every field exercise. I have carried bouillon cubes in my personal survival kit for years based on what I learned from that particular experience. The possibility of hypothermia is an even more critical consideration if you intend to foray into the woods alone as civilians often do. Especially if you inadvertently get drenched from an unexpected downpour or fall into a stream or canal. I am sure most of the readers of SSD already know that hypothermia doesn’t just happen in cold regions or in the winter. I have seen service members on the brink of hypothermia even in places where people don’t expect it like in Iraq.

The good news is that we have a lot of suitable metal cups to choose from…starting with the USGI issue canteen cup. If you had been in the US Army or USMC prior to 1910 you would have likely carried a round canteen on a strap over your shoulder or on a saddle and a separate small tin cup with a finger loop handle. Most commonly a squad would share a communal coffee pot or cook pot and each soldier would gather around the fire to get his cup or mess tin filled. Of course this methodology worked best in the days when campaigning happened mostly in the daylight and armies bivouacked at night. The experience of the Army in the Spanish American War and especially the subsequent guerrilla fighting in the Philippines made military leaders reconsider almost every aspect of a soldier’s kit.

So for the first time in 1910 the US Military fielded a canteen “system” which included a cover designed to attach directly to a cartridge or pistol belt and hold: a new aluminum canteen with the now familiar kidney shaped bottom and an aluminum cup which nested around the base of the canteen. Minor modifications to the aluminum canteen were made over the years until it was replaced with the plastic model in 1961. The original 1910 canteen cup was the same size and shape as today’s cup. And its L-shaped folding handle remained the standard until 1974. That is when the wire handled version was introduced along with the first fielding of the LC-1 ALICE gear. So the canteen cup most of us grew up with is now 105 years old and still serving faithfully and well. Note: it is also not uncommon for field gear improvements to be borrowed from other countries. Third from the left in the photo is actually a British canteen cup with wire handles very similar to our current (1974) version…yet dated 1945.

I would suggest that even if you aren’t carrying the USGI canteen anymore you would still be well served carrying the canteen cup as a minimalist water heating and cooking implement. But there are other worthy choices. The issue Artic Canteen Cup has an elongated design that fits upright quite handily into many ammo pouches. Surplus canteen cups from other countries offer different size and shape options. And if you also use the associated canteens those cups are usually designed to nest and save space as well (see Swiss model in photo). A number of companies make cups that fit around the metal or plastic Nalgene bottles. While some even smaller cups are meant to stand alone. But all can be used to heat water when necessary. Something to consider as you make a choice is that few commercial cups are sized to hold the equivalent volume of the USGI canteen cup.

Lids are an accessory I would also suggest you consider. They are not necessarily essential but I would call them mission enhancing. They help keep dirt and debris out of the cup as you are heating the contents. But even more importantly, a lid helps capture the heat and can significantly speed up the boiling process (and thereby save fuel and time). Many commercial cups come equipped with lids for the very same reasons. However, despite the obvious benefits lids provide, the US Military has never produced or issued a canteen cup lid. Luckily there are adequate commercial versions readily available. I have two examples in the picture above. Both work. The thicker one is of higher quality. Still I prefer the thin one because it is lighter and takes up less space. Of course in a pinch you can origami one out of foil or other non-flammable material.

Finally I’d like to mention utensils and sanitation. If you have served in the US Military in the last 20 years or so then you have almost exclusively used one time throwaway plastic utensils (knife, fork and spoon) and paper plates instead of metal mess kits. From a preventative medicine point of view that is a very good thing. Keeping metal utensils and mess gear clean is a challenge in the field. Contracting a food or water borne illness can make you a casualty very quickly. And even in less serious cases, as many of us can attest, having to deal with a bout of diarrhea in an austere environment is an unpleasant experience. So why risk it? I would say don’t if you are hooked into a supply system that can get those expendable items to you on a routine basis.

However, if you are not or have a different mission that limits you access to that kind of support then you need something to cook and eat with besides your fingers. As with metal cups there are numerous options when it comes to suitable field utensils. They are commonly made of aluminum, stainless steel or titanium. Select the option that is right for your needs. The sporks are quite popular but don’t help much for food preparation. The old standard US and German Mess sets are not hard to find and give you a better range of capabilities. Just remember to sharpen the mess knives as they are issued dull. Don’t forget a simple reliable can opener like a P38. Best to have two of those to ensure you have one when you need it. A pot grabber is also helpful if you are eating from tin cans or if the handles on your cup get too hot to hold. Whatever you use it is important to do everything you can to keep you utensils and cup clean! Store them in a Ziploc inside a fully enclosed pouch and wash them or at least dip them in boiling water as often as you can. You will be glad you did.