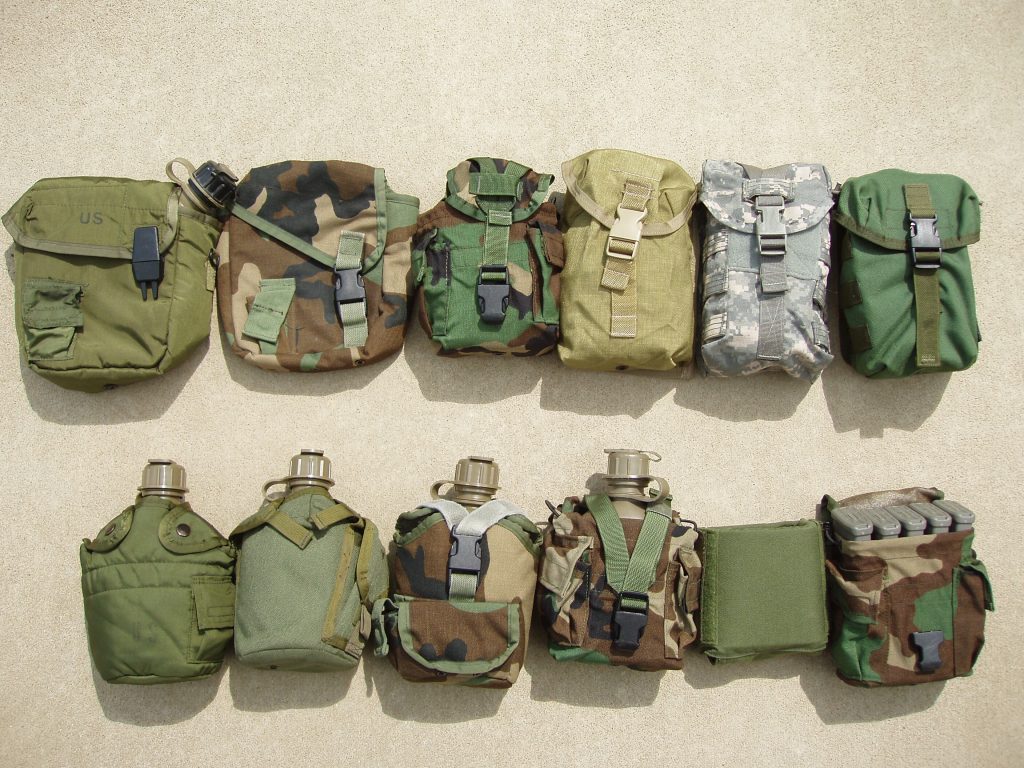 As you can see from the attached picture I own a lot of different canteen covers. And I’ll admit that this is just the tip of the iceberg. I never intended to acquire so much gear but it just turned out that way. I have way too many tuff boxes full of it; as I am sure a good number of the other readers of SSD do as well. But I am not a collector of militaria either (although my wife has accused me of being a hoarder and wants very much for me to sell the gear I have accumulated). Almost everything I have was used by me during my professional career in the Army. A few other items I have acquired over time for personal ‘”experimentation” and future use.

I “grew up” in the Army in the late 70s and early 80s before there was much of a “tactical gear industry”. In those days soldiers, sailors, airmen and marines, conventional forces or what we now call SOF all used what Uncle Sam issued (with perhaps some minor modifications) because there simply wasn’t anything else. That wasn’t necessarily a bad thing. You learned to work with and optimize what you had. There was nothing “perfect” available…just lots of OD green “good enough”. That actually worked for me. I enjoyed tinkering with what I had and seeking improvements to my kit throughout my service.

Now, that doesn’t mean I’m claiming to be any kind of a gear “expert”. I definitely don’t know all there is to know or have all the answers about anything. But the American taxpayer did spend a lot of money giving me loads of gear and training and then sending me places all over the world where I could put it all to use. And I learned a few things about what works for me (or doesn’t) along the way. So I will attempt to use this forum as an opportunity to share my experience and perspective with others who might, hopefully, find it useful.

So let’s talk about canteen covers. Bottom line, whether general military issue, special issue or personal purchase, all of these covers will do what they are designed to do; i.e. securely carry the standard one or two quart canteen. But some just do it better. Starting from the bottom left of the photo we have the issue ALICE cover that should be familiar to everyone. To the right of it is one from Eagle Industries. For all practical purposes these two are identical. The only substantive difference is that Eagle dispensed with the much disliked pile lining of the issue cover. Still, they both attach to the pistol belt with metal “ALICE Clips”. They are sized to fit (rather snugly) the canteen and canteen cup. In fact, sometimes it was a real pain to unholster your cup from these carriers. But conversely having the cup inside did help hold the carrier open and made it much easier to reinsert the canteen itself. These canteen covers could be used as expedient utility or ammunition pouches as they were sometimes in Vietnam. But they were designed to be strictly single purpose.

Third from the left is the original SPEAR / ELCS version. Despite the cosmetic difference and the molle attachment system, this cover is really no different than the first two. It is sized exactly the same and is also a single purpose design. It even has a pile liner that most people chose to immediately strip out. The elasticized closure wasn’t well designed and tended to get snagged on the canteen neck and cap. This was, in my opinion, a disappointing swing and a miss for SPEAR out of the gate. I didn’t use this one long.

Fortunately something much better came alone about the same time. This is the multifunctional canteen / general purpose pouch that was originally part of the R.A.C.K. fielding and later became molle general issue. I really liked this pouch. It was sized to be a little looser than its predecessors. So the canteen, cup and even canteen stove could be inserted and extracted much more easily. But what really made it a game changer is that it came with two closure options including a full flap that supported carrying other items besides canteens securely. Pictured on the bottom, third from the right is one with a canteen in the normal carry configuration. Next is the padded sleeve that can be inserted to protect items like NODs. The sleeve is a handy piece of kit in and of itself and will work in numerous utility or ammunition pouches. And on the far right is the canteen pouch in general purpose mode with five Magpul magazines. On the top row center is one last example of this pouch with the flap over the canteen. I know full well that this isn’t considered the “right” way to stow the canteen in this pouch. But if you are in say a “moon dust” situation or in any area when the cap and neck of the canteen is subject to become contaminated with dirt or debris of any kind I suggest you keep the entire canteen covered as best you can.

That brings me to what has become my preferred style of canteen cover for about ten years now. The three on the top right. From left to right they were made by LBT, Paraclete and HSGI. All solidly built products as you would expect. But I like them specifically because they are all sized to fully enclose the canteen (including cup and stove). And therefore they are a little deeper than the issue pouch and can carry more items when used in the utility role. Not really a new or unproven idea here. The Brits and Aussies have been using pouches like this to carry their canteens for decades.

Sadly, despite my enthusiasm for the design, I don’t believe any of these three pouches are being produced today. Many people now have gotten into the habit of carrying hydration bladders as their only water source. Old school canteens (and canteen cups) are an afterthought. So today’s consumers apparently favor more compact general purpose pouches that are just barely big enough to hold the issue canteen alone. And that is of course what the industry is producing. I’ll not argue against that. If you are still in the fight then you are certainly in a better position to judge what works for you than I am. But I’m convinced that canteens still have their place and provide a viable and valid alternative. For example, canteens are much easier and quicker to top off from a stream than a bladder when you are operating away from fixed bases and at the end of long supply lines. That is not to say that I think a canteen is the right tool in all situations. I myself didn’t carry a canteen after about 2004 in Afghanistan or Iraq. But after that timeframe I wasn’t doing extended dismounted patrolling either. If my mission set had evolved differently I would have reconsidered and reconfigured.

Lastly I’d like to mention the two quart canteen and carrier. I wore one or two of these on my ruck for years in the days before bladders. They did the job. But still I was pretty quick to put them away and slim down the lateral profile of my ALICE once I discovered Camelbaks. In fact I didn’t realize until I started putting this article together that I apparently had only one two quart canteen and two covers left in my gear menagerie. The one on the far left is the OD version you all know. It is also produced in tan and if you are still being issued a two quart canteen this is what you are getting. The SPEAR / ELCS woodland cover, like its one quart sibling missed the mark and was a copy but not an improvement on the venerable ALICE version. The cover aside, probably the best thing about the two quart canteen was that it could be collapsed as it emptied and therefore made minimal sloshing noise when moving.