During 1942, the U.S. procured canteens made of a low grade metal with a porcelain enamel coating. This attempt to save more valuable aluminum and stainless steel had only temporary benefits and was stopped by the end of 1942 when the traditional metals were again released for use.

The original M-1910 one quart canteen was made of aluminum. Early in World War II, aluminum was urgently needed for aircraft. Therefore, in 1942 stainless steel canteens were substituted for aluminum and alternative materials were investigated such as plastic for canteens. Another idea for conserving the most valuable metals was to use a lower quality metal with a porcelain enameled coating.

The blue/black porcelain plated canteen’s nomenclature was Canteen, M-1942 or Canteen, Enamel, M-1942. They were described by Jeffersonville Quartermaster Depot specifications JQD 4C 13Feb42 and JQD 94 23Mar42 with Stock No. 74-C-83. The porcelain plated canteens (and matching canteen cups) were made in 1942 only. Most of the supply is believed to have gone to the Marine Corps and Navy, perhaps because the Army did not want them.

U.S. and the manufacturer’s marks were usually on the bottom of the canteen body.

The M-1942 canteen was not considered a success. Under field conditions, Army and Marine Corps users complained of chipping of the coating which would contaminate their water. The canteens (and canteen cups) quickly took on a battered look due to numerous chips and dings. The porcelain enameled steel canteens were rapidly phased out of the military, although many survived to become an interesting collectible. 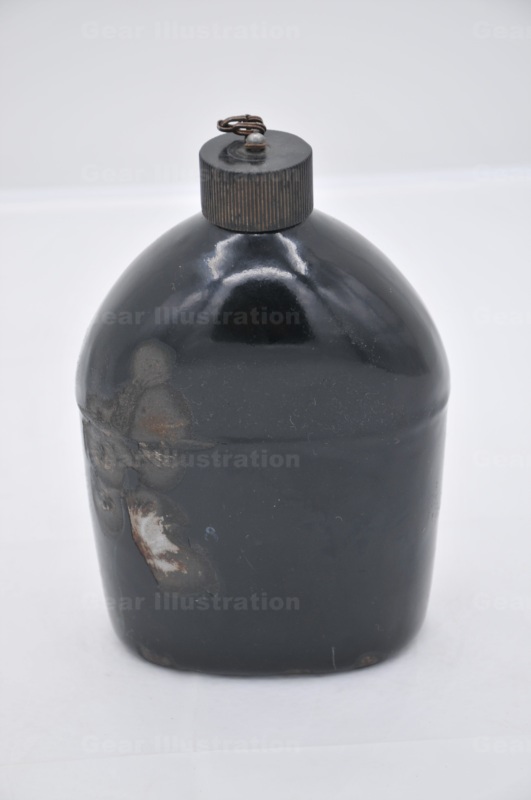